Recently I’ve got an email from one of my managers saying: “If the team will solve K bugs this week, I will make you a breakfast”. It can be food, it can be money or it can be sex. Does not matter. The idea is: you work hard and do something that is not possible otherwise and you will get a reward.

This is a good case to apply system thinking!

Managers sometimes think, and my guess is that this manager in particular, that the dynamics looks like this: 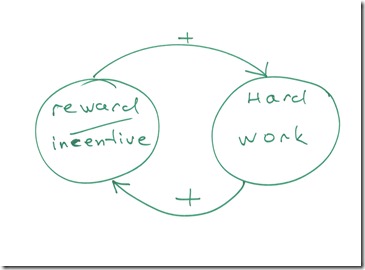 Meaning that raising reward/incentive will increase the amount of hard work that people are putting.

There is a number of problems with this approach, for example: it assumes that people aren’t working hard enough already. However, I will concentrate on the connection between reward and hard work.

On a basis of my observations, this method does not work. At least it didn’t in this particular case. It does sounds logic, so why it does not work?

More people-aware managers find out that the connection between award and hard-work is not direct, but rather looks more like this: 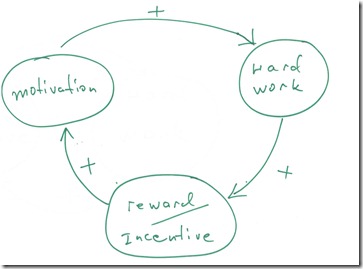 This view is much more realistic and sometimes appears to work. It does even shows a basic problem with this approach: there is a connection between reward and hard-work and it will go into both directions. Once reward is gone, the hard-work is gone as well.

Even though the above view works from time to time, it is still simplified. One sigh of the simplification is that:

The above two observations together mean that there is another relation that is not covered by the above view. 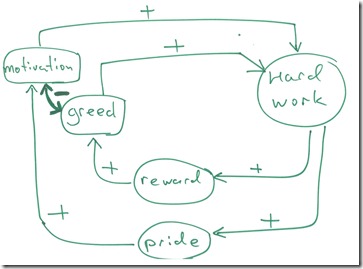 Notice that there is a motivation->hard-work->pride force-feeding loop. Meaning that people with motivation will work harder, will take pride in their work, which will motivate them again.

The inner loop is the one targeted most of the time. This is also the one that is the easiest to target. However, notice that the larger the “greed” the lower the motivation. This means that increasing the reward will increase the “greed”, but decrease motivation. Sometimes it will work, but sometimes the reward will be increased, but this will decrease the motivation in such way that people will not work harder. This will happen when there is no trust between developers and management.

What happened to that manager? He got promoted.